As we get ready to embark on Week 11 of the 2017 NFL season, the Road to Super Bowl 52 in Minneapolis gets closer and more narrow. We’re looking back at the first back-to-back rematch in Super Bowl history, as the Dallas Cowboys take on the Buffalo Bills for the second straight season in Super Bowl XXVIII. 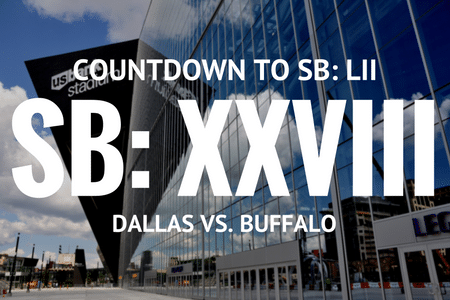 As two teams met in consecutive years, the Super Bowl would also have consecutive results; the Dallas Cowboys coming out victorious over the Buffalo Bills as Super Bowl champions. The Cowboys would defeat the Bills, 30-13, in front of over 72,000 fans at the Georgia Dome in Atlanta, Georgia.

Cowboys running back Emmitt Smith would take home Super Bowl MVP honors in 1994, carrying the ball for 132 yards and two touchdowns, while also recording four catches on the night.

Halftime entertainment for Super Bowl XXVIII was a big deal in 1994, as the Judds, Winona and Naomi, would perform. The game was broadcast on NBC to over 90 million football fans worldwide, with Dick Enberg and Bob Trumpy handling broadcasting duties. The cost of a 30-second commercial spot for the Super Bowl in 1994 was up to $900,000!