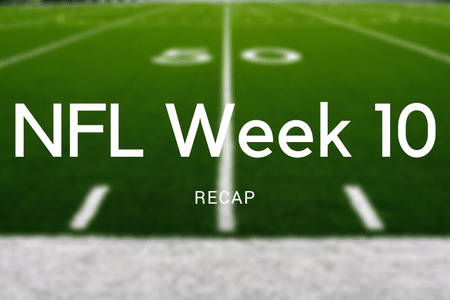 The Los Angeles Rams, winners of 7 of their first 9 games, moved to 7-2 on the season after rolling the Houston Texans, and continuing their high-producing offensive numbers.

Quarterback Jared Goff, considered by many to be the most improved quarterback in 2017, completed 67.6 percent of his passes for 355 yards and three touchdowns, with no turnovers. Wide receiver Robert Woods, acquired in the offseason from the Buffalo Bills, highlighted the day, reeling in eight of Goff’s passes for 171 yards and two touchdowns. The Rams are now in sole possession of first place in the NFC West, and a contender for a first-round bye in the NFC Playoffs.

Getting that monkey off their back! Coming into Week 10, the San Francisco 49ers were one of two teams (the other one, the Cleveland Browns) who had yet to win a game in the 2017 season. And heading into Week 11, there is only one.

The 49ers were able to defeat the lowly New York Giants, 31-21, thanks to a decent outing from rookie quarterback C.J. Beathard. In just his third game at the helm, Beathard completed 76 percent of his passes for 288 yards, two touchdowns and just one interception. The win moved the 49ers to just 1-9 on the season, but gave head coach Kyle Shanahan his first career win, in his first year with the team.

The Champs Make A Statement

One of the big surprises of the 2017 season has been the peaks and valleys of the defending champion New England Patriots. But on Sunday night, the defending champs made a statement, on the road, in primetime, against the AFC rival Denver Broncos.

Quarterback Tom Brady tossed three touchdowns and 266 yarrds with a 73.5 percent completion percentage, completing passes to nine different receivers, in a 41-16 rout of the Broncos, moving the Patriots to 7-2 on the season, and full control of the AFC East.

Scores from Around The League: Week 10 (via Fox Sports)