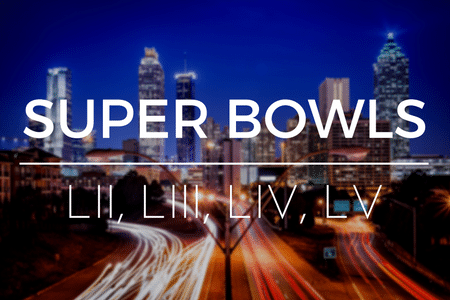 With Super Bowl LII heading to Minneapolis, Minnesota, teams are preparing themselves for the bright and shiny new U.S. Bank Stadium, home of the Minnesota Vikings. So where are the future Super Bowls headed?

Debuting the brand new $1.4 billion Mercedez-Benz Stadium for the 2017-18 NFL season, Atlanta will host their third Super Bowl in 2019 with Super Bowl LIII capping off the 2018-19 NFL season.

“We’re thrilled to show off Atlanta in 2019 for Super Bowl LIII,” Atlanta Falcons owner Arthur Blank said. “Mercedez-Benz Stadium will be unique, not only America, but throughout the world. We think it’s a great host stadium for the Super Bowl and we love it being in downtown Atlanta.”

This will be Atlanta’s third time hosting the biggest game in the world, hosting Super Bowl XXVIII in 1994 and XXXIII in 2000. The city is no stranger to hosting large sporting events, also having hosted the Summer Olympic Games in 1996.

Where else would you rather be in mid-February than south Florida? The Super Bowl heads to Miami for a record 11th time with Super Bowl LIV in 2020, taking place at the newly-renovated Hard Rock Stadium, home of the Miami Dolphins.

Super Bowl LIV in Miami will be the perfect vacation spot for football fans from all walks looking to wind down from the long season, while experiencing the luxurious nightlife that comes with the bright lights of the city.

For the second year in a row, the Super Bowl returns to the sunshine state, this time to Raymond James Stadium, home of the Tampa Bay Buccaneers. Home to some of the most luxurious beaches on the gulf coast, Super Bowl fans are in for a treat for two straight years in the sun.

This will be Tampa Bay’s 5th time hosting the Super Bowl, but just the first since 2009 and Super Bowl XLIII.

Due to construction delays and a wet spring season, the Super Bowl to be played at the new stadium in Los Angeles was delayed from 2021 to 2022 and Super Bowl LV.

The NFL made its long-awaited return to the “City of Angels” in 2016, and now with two teams (the Los Angeles Rams and Chargers), it was only fitting that the Super Bowl make its return to LA as well. This will be the first time hosting the Super Bowl since Super Bowl VII at the Memorial Coliseum in 1973.