The 2016 NFL Draft is nearly a month away, and still fans and experts alike wonder at who will be making the selections in the top ten. Teams interested in moving up have expressed desire to draft quarterbacks. Let’s take a look at the 2016 NFL Draft and who might be on the move. 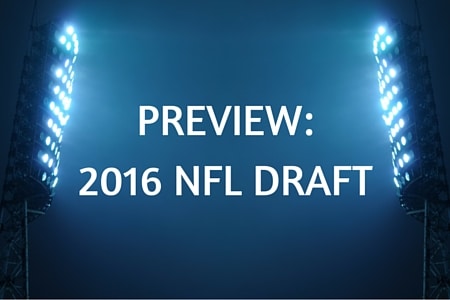 The biggest story of the 2016 NFL Draft is the action that might be happening at the front of the pack. Although the Tennessee Titans hold the rights to the #1 overall pick, the odds of the Titans actually making that selection seem to vary.

California quarterback Jared Goff and North Dakota State quarterback Carson Wentz appear to be the most coveted prizes in the 2016 NFL Draft. Movement in the top 10 picks of the draft appears to be imminent, with the Los Angeles Rams, San Francisco 49ers, Cleveland Browns and more looking to the draft for their franchise quarterbacks.

Offensive tackle Laremy Tunsil from Ole Miss has cemented himself as the top selection in the draft, although the Titans have repeatedly expressed desire to listen to offers for the top pick in the draft. Other top prospects who have cemented themselves in the top 10 of the NFL Draft include defensive back Jalen Ramsey from Florida State, and defensive lineman Joey Bosa from Ohio State University.

Relive the 2015 NFL Season from our Super Bowl fan guide! The 2016 Players Tailgate at Super Bowl 50, the playoffs, Super Bowl 50 from San Francisco and more!