The time has arrived. Here we are, the week of Super Bowl 50 in sunny San Francisco, California. All of the pregame festivities and star-studded halftime show aside, it all boils down to one thing–the AFC champion Denver Broncos going up against the NFC champion Carolina Panthers.

The Denver Broncos ride their red-hot defense, which was able to hit or sack New England Patriots quarterback Tom Brady 17 times and intercept him twice, into San Francisco. Defensive playmakers Von Miller and Demarcus Ware will be looking to wreak havoc on Carolina’s backfield.

Keys to a Denver Broncos victory:

Keys to a Carolina Panthers victory:

Are you a die-hard member of Bronco Nation? A member of the #KeepPounding Carolina club? Or maybe just a football fanatic, looking for a perfect weekend getaway to Super Bowl 50? Either way, we’ve got Super Bowl 50 travel packages just for you! Included, a ticket to this year’s Players Super Bowl Tailgate! Over 25 current NFL players, Erin Andrews, Guy Fieri, an open premium bar…what more could you want? Click here for more info. 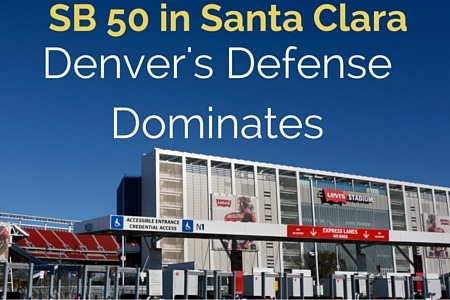 And now, the regular season has ended. On Sunday afternoon in Santa Clara, the NFL season came to it's conclusion. Read more