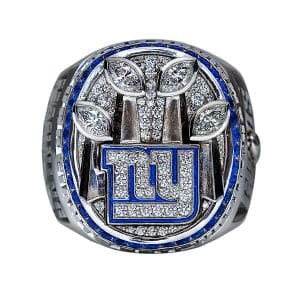 The amazing ring was unveiled on Wednesday in NYC at the Hawaiian Tropic Zone and was designed by Tiffany & Co with input from the team’s owner, management and key players.

ESPN reported that the Championship ring is covered in diamonds and contains four Vince Lombardi Trophies, representing Giant’s four NFL Super Bowl titles. Each Lombardy trophy is set with a “marquis diamond” representing a football. The NY Giants’ logo is circled by the trophies and is set with more diamonds. The top of the ring includes 37 blue sapphires which sets this ring apart from any other Championship ring.

The underside of the each ring includes phrases like “finish” and “all in,” these are terms the team leaders used during its amazing 2011 NFL Championship title run. The shanks of the ring contain the final score of the game, the player’s name and number, and the dates of the Giant’s other Super Bowl titles.

The funniest quote about the new ring was from Giants player Justin Tuck “He wanted a ring you could see from 10 tables away.  I wanted one that was big enough to be seen throughout any restaurant you go in and see it from each corner.”  He calls it “The 10 Table Ring”, lol.

Congratulations to the New York Football Giants for an improbable and amazing run for the title, you guys deserve it!