It’s here, the 2016 NFL Draft! As some teams are in a rebuild, others look to find that player that might be the final piece on their journey to Super Bowl 51. Here are the top prospects, and their more-than-likely new teams. 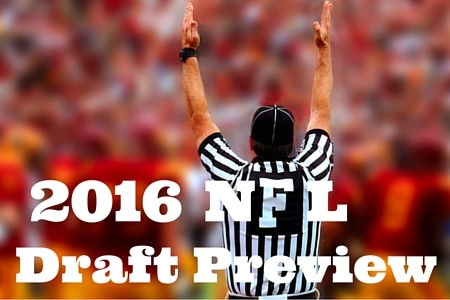 The biggest questions heading into the 2016 NFL Draft are the quarterbacks.

The Los Angeles Rams and Philadelphia Eagles traded up to grab the #1 and #2 draft picks, respectively. And the popular suggestion is that both California QB Jared Goff and North Dakota State QB Carson Wentz are going to go one-two. The exact order of those two varies by mock draft.

Quarterbacks outside of those two, however, also remain a hot topic of conversation. Memphis QB Paxton Lynch and Michigan State QB Connor Cook have also garnered quite a bit of attention, and with the demand of quarterbacks throughout the league, it isn’t out of the questions both will go in the first round.

Plenty of storylines outside the quarterbacks lie within this year’s NFL draft.

The offensive linemen run aplenty in the draft, with several expected to go in the first 15 picks. Ole Miss tackle Laremy Tunsil headlines the group, though once the choice for the top overall selection, now has seemingly dropped within the top 10.

Running back Ezekiel Elliott out of Ohio State and wide receiver Laquon Treadwell out of Ole Miss headline their positions, with gaps between them and the second best. Same can be said for cornerback Jalen Ramsey out of Florida State.