The NFL Draft is where futures are chosen, and sometimes, legends are born. Here’s who got better, and here’s who didn’t, on the road to Super Bowl 51. 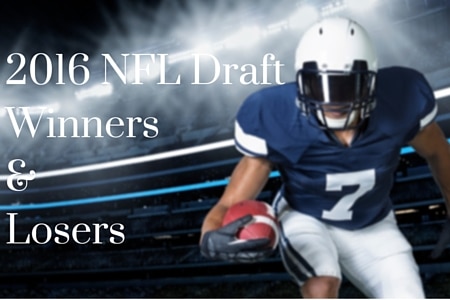 The Jacksonville Jaguars continued their offseason trend of bolstering their defense in the 2016 NFL Draft.

With the 5th overall pick in the draft, the Jags took Florida State defensive back and arguably top defensive player in the draft, Jalen Ramsey. This pick added a lockdown college CB to a secondary that already saw an addition of Prince Amukamara this offseason.

The Jaguars continued to work on the defensive side in the second round, taking UCLA linebacker Myles Jack. Although Jack’s knee injury from 2015 raised questions with teams around the league, when healthy, the LB provides a burst on the backside of the defensive line with some of the best prospects.

Jacksonville rounded out their NFL Draft by adding more bulk to their defensive line, add defensive linemen Yannick Ngakoue out of Maryland, Sheldon Day out of Notre Dame and Tyrone Holmes out of Montana in rounds 3-6.

Of all the teams that should understand the misfortunes that can come from trading a slew of draft picks for a top-2 overall pick, one would believe it would be the Los Angeles Rams. In 2012, the Rams were the beneficiaries of the Washington Redskins’ coveting quarerback Robert Griffin III at the #2 overall spot, reeling in a king’s ransom for the pick.

Two weeks before the 2016 NFL Draft, the Rams traded two first-round picks plus others, for the #1 overall pick in California QB Jared Goff.

Now, we’re not saying Goff will be a bust in the NFL. However, with QBs such as Ryan Fitzpatrick, who broke a New York Jets single season touchdown record in 2015, still on the market, its hard to justify placing all of your eggs in an unproven rookie QBs basket.