With Week 3 of the 2017 NFL Season in the books, we’re recapping the week that was on the Road to Super Bowl LII. 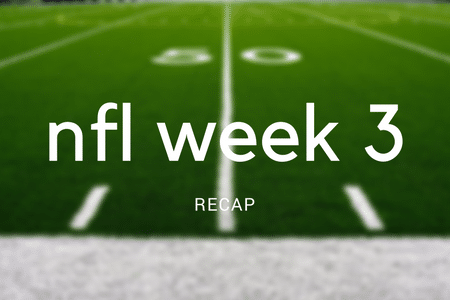 When checking the Thursday Night Football schedule, the Los Angeles Rams facing the San Francisco 49ers was one that many probably didn’t circle on their calendars. Well those that chose not to watch the game missed out on a Thursday night thriller.

After scoring a touchdown to pull within two, the 49ers would go for the game-tying two point conversion and fail. On the ensuing kickoff, the Rams would fail to recover the onside kick, giving San Francisco another shot. However, LA’s defense would hold stout and prevent the 49ers from getting a chance at a game-winning field goal.

The Rams would walk away with a 41-39 victory over the 49ers, but not before a thrilling shootout between the two. Rams quarterback Jared Goff continued to surprise in his 2017 showing, putting up 292 yards and three touchdowns. Rams running back Todd Gurley II had 133 yards rushing and three (3!) first half touchdowns on the ground.

In one of the more surprising games of Week 3, the Houston Texans went back and forth with the New England Patriots, trading shares of the lead the entire game with seven lead changes. It was the seasoned vet, however, that would get the better of the rookie.

Still looking for their first win of 2017, the New York Giants traveled to Philadelphia to take part in an NFC East showdown against the division rival Philadelphia Eagles.

Despite 366 yards through the air, the Giants struggled to carry the ball on the ground, with just 49 yards rushing split between three running backs. The lone bright spot for New York was a stout showing from their young receiving corps, with receivers Sterling Shepard and Odell Beckham Jr. combining for 16 catches, 212 yards and three touchdowns. The Eagles, however, would drive and hit a game-winning field goal as time expired to take the 17-14 divisional victory.

Scores from Around The League: Week 3 (via Fox Sports)