With just a matter of days remaining in the 2017 NFL season, we’re getting closer and closer to the NFL Playoffs and the road to Super Bowl 52! Up next in our countdown; Super Bowl XL, live from Detroit, Michigan, between the Pittsburgh Steelers and Seattle Seahawks. 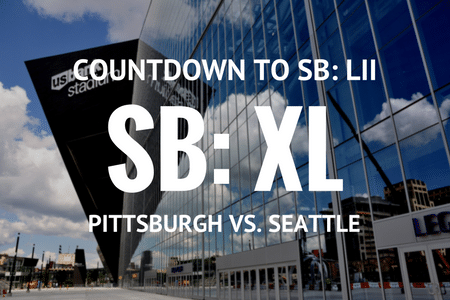 A showdown between two of the best teams that season, the Pittsburgh Steelers would walk away from Super Bowl XL as champions, a 21-10 victory over the Seattle Seahawks. Played at the current home of the Detroit Lions, Ford Field in Detroit, Michigan, nearly 70,000 fans would pack the stands for Super Bowl XL.

Super Bowl XL would feature a unique National Anthem ahead of kickoff, as the anthem would be performed by a variety of artists, includingAaron Neville, Aretha Franklin and Dr. John. The coin toss to get the game started would be tossed by Patriots quarterback and former Super Bowl MVP Tom Brady, a coin toss representing all Super Bowl MVPs to come before him. Halftime would be performed by the legendary Rolling Stones to over 90.7 million viewers on ABC, with the broadcasting duties being handled by the legendary John Madden, Al Michaels, Michele Tafoya and Suzy Kolber.