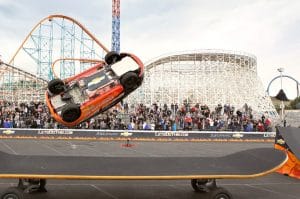 One of the most memorable events for a Super Bowl commercial in 2012 was Rob Dyrdek, kick flipping the new Chevy Sonic over the Worlds Largest Skateboard and onto a landing ramp on live TV.  The bit included a catchy tune from The Band Fun, called “We are Young”. The kickflip was set up in the parking lot of Six Flags Magic Mountain in Valencia, California. If you look close, you can see Dyrdek’s eyes and facial expression before and during the stunt, I must say, he was scared _ _ _ _less, LOL. The event was known as Stunt Anthem and featured members of the band OK Go, who did a commercial previously for Chevy to their song and music video for “Needing / Getting”.

During the commercial, Chevy Sonic also did it’s first Bungee Jump, Sky Dive and Kickflip, all very cool. This was voted as a favorite by many fans watching the big game in 2012.