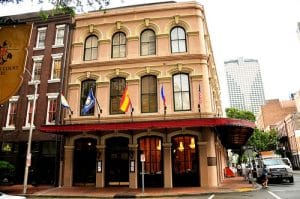 New Orleans, or “The Big Easy,” is one of the United States’ premier culinary destinations. The city has French, Spanish, Creole, American and many other influences dating back hundreds of years. The restaurant business will be in full swing for the upcoming Super Bowl, and sometimes as a tourist it is not so easy to distinguish the good from the bad. This is a guide to some of the best restaurants in New Orleans, highly rated by both critics as well as locals.

Here are our three recommended highly acclaimed, local restaurants, have fun and enjoy.

This restaurant is located in the heart of New Orleans’ Garden District and has served the people of New Orleans since 1880. Commander’s Palace serves the Creole, Cajun, and French fusion cuisine that is native to New Orleans. This cuisine was born in N’awlins and consequently it remains the best place to taste it. The Turtle Soup is to die for and has a spicy Cajun kick. There are many different types of Gumbo, a sort of thick soup filled with different ingredients like rice, shrimp and sausage. Gumbo is a New Orleans favorite and Commander’s Palace is among the best places to get it.  If you want classic, authentic, high quality Cajun Creole style cuisine, Commander’s Palace is the place to go.  Do some more research at Zagat  https://www.zagat.com/neworleans and you’ll be eating at all the places in town, guaranteed.

Dante’s Kitchen is one of the best restaurants in the entire city (Riverbend area). The name of the restaurant is a reference to Dante’s Inferno and things can get very spicy here. This restaurant provides a unique version of traditional American flavors and tastes along with a dash of new world creativity. The “Chicken Under A Brick” is a delicious oven roasted chicken dish that must be sampled. The Trois Mignon is an excellent beef dish and, while it is originally French, it has a distinct New Orleans flair. The dinner choices are great, but the kitchen’s breakfast offerings shine as well. A good choice is the biscuits and gravy along with a sparkling, sweet mimosa. If you are in town for the Super Bowl and are craving a hearty yet classy meal, Dante’s Kitchen is the place to visit.

Restaurant August is the height of haute couture cuisine in the city of New Orleans. Reservations are difficult to come by, so if you are planning on coming into town for the Super Bowl, you should make a reservation far in advance. Most people come to Restaurant August for the tasting menu which consists of a number of set courses served by the chef. The style of the tasting menu is much like Spanish Tapas; many small plates that keep coming from the kitchen. Restaurant August serves traditional French cuisine as well as locally inspired New Orleans cooking. This is a fantastic choice to get a taste of classic New Orleans food mixed with high cuisine sensibilities.

If you will be in the French Quarter for the Super Bowl, you should consider on these options to experience the best cuisine the city has to offer. In addition to our short list, there are many more fine places to dine in the Big Easy.