Another big week with huge playoff implications in the National Football League, as four more teams punched their tickets to the playoffs and several others put themselves in the backseat. Here are four things we learned in week 15 of the NFL’s regular season. 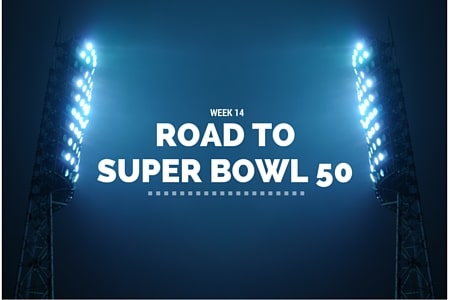 The Road to Super Bowl 50 goes through (surprise!) New England

The New England Patriots secured a first-round bye in the AFC playoffs once again this year, realizing the fear of most teams in the AFC–that the road to Super Bowl 50 goes right through Gillette Stadium.

Following their two-game skid, the Patriots have now won two straight, improving their record to 12-2. The Patriots also attempted to alleviate their running back problems caused by injury, by signing three-time pro bowler Steven Jackson to the active roster. The former St. Louis Rams and Atlanta Falcons running back has not played this season.

While the Broncos struggle with the young Brock Osweiler and the rest of the AFC hurting, it was already hard to not view the Patriots as the AFC favorite. Now that the road to Super Bowl 50 goes through snowy New England, it’s almost impossible to see anyone else representing the AFC.

We want to see a New York Giants vs. Carolina Panthers playoff matchup

By far, the most intriguing match-up of week 15 came between the New York Giants and the undefeated Carolina Panthers. However, it wasn’t Carolina’s improving to 14-0, or the New York Giants’ 28-points unanswered rally that stole headlines.

Rather, it was two individual players.

Panthers cornerback Josh Norman and Giants wide receiver Odell Beckham Jr. were at each other’s throats during the game, so much so that the NFL handed down a one-game suspension to Beckham on Monday morning.

A rematch in the NFC playoffs would only heighten the already high buzz surrounding the match-up between these two. Something the fans, but maybe not the NFL, would love to see.

The Cincinnati Bengals might be OK with A.J. McCarron at QB

After going down with a broken thumb, rumors were swirling that Cincinnati Bengals quarterback Andy Dalton would be out for the season. And despite not needing surgery, it became clear that Dalton would be absent until the playoffs at the very least, discouraging Bengals fans and dashing promising playoff hopes.

But after punching their playoff ticket in week 15, it became clear that the Bengals might be OK with former Alabama standout A.J. McCarron at the helm.

McCarron started his first career NFL game on Sunday against the San Francisco 49ers, throwing for 192 yards and one touchdown. However, it wasa McCarron’s game management presence, controlling the tempo with the offense, that led the Bengals to a 24-14 victory.

McCarron might not take Cincy to Super Bowl 50, but he may very well be a good replacement until Dalton can retake the reins.

Chuck Pagano is receiving a Christmas gift from the Indianapolis Colts

After losing their third straight game, the Indianapolis Colts drove themselves right out of the division lead and into the backseat of the Houston Texans. Embarrassing loses to the Pittsburgh Steelers and division rival Jacksonville Jaguars were already bad, but a division loss to the now-leading Houston Texans, a loss in which the Colts managed to only score one touchdown, was worse.

Fans booed and cursed as the Indianapolis Colts walked off their home field on Sunday. Players walked off with their heads down. Head coach Chuck Pagano took the fall in the press conference, but is at the receiving end of a Christmas week gift from his employers.

It’s all but a foregone conclusion Pagano will leave the Colts organization following the season. No contract extension and rumored tension between Pagano and general manager Ryan Grigson havee all but confirmed it. However, Pagano has yet to be fired in the way that offensive coordinator Pep Hamilton was earlier in the season, and in the way Colts fans would like. One would have to believe Colts owner Jim Irsay is allowing Pagano to go out with dignity and without embarrassment.

What did you learn about week 15 in the NFL? Is your favorite team an odds-on favorite to make Super Bowl 50? Get your ticket packages today! And don’t miss out on the world’s best tailgate, the 2016 Players Super Bowl Tailgate! Emceed by none other than Fox Sports’ Erin Andrews, enjoy delicious food whipped up by celebrity chefs, a premium open bar, and meet and greets with current NFL players!