As the NFL’s regular season winds to a close, talks of playoff odds and award-winners begin to heat up. The NFL’s most valuable player award, the pinnacle of regular season personal achievement awards in the league, is an award that garner’s yearly debate among the media. Who deserves the award the most? What should be the proper criteria for the award? Below, we’ll review this year’s top MVP candidates heading into the final week of the season. 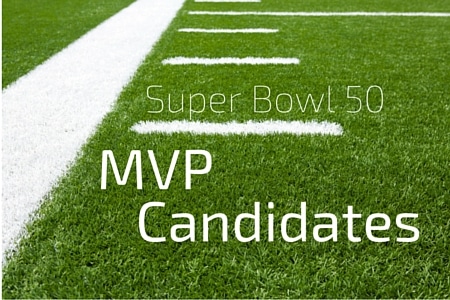 Despite losing their first game of the season to the Atlanta Falcons in week  16, the dabbin’ quarterback in Carolina is still having a career season for his Super Bowl 50 favorite Panthers.

In week 16, on an 8-yard touchdown scramble, Cam Newton became the first quarterback in NFL history to record over 30 passing touchdowns and eight rushing touchdowns in the same season . That’s more in one season than the legendary Randall Cunningham or the electric Michael Vick has ever recorded. And Newton has been doing so all season without his number one receiver in Kelvin Benjamin, who was lost for the season with a knee injury before the season even started

Don’t go so far as to discount what Carolina’s defense has provided in their quest for the NFC’s top seed, but Newton has been the energetic and youthful spark every team needs in a franchise quarterback. Without a doubt, Newton leads the league’s MVP race through 16 weeks, and it’s hard to see him being surpassed.

It seems that as long as Tom Brady has a helmet and pads on, he’s considered to be a favorite for the NFL MVP and a Super Bowl favorite. But this year, more than ever, the Patriots offense has heavily relied on the four-time Super Bowl champion quarterback.

After a tumultuous off-season that saw a four-game “Deflategate” suspension, public backlash and that same suspension overturned by a federal judge, Brady has been channeled his frustrations into one of the best seasons of his career. Throwing for an NFL-high 4,636 yards and 36 touchdowns through 16 weeks, Brady has led his Patriots to an AFC-best 12-3 record. All of these numbers despite losing players like Dion Lewis and Lagarrette Blount for the season, and receivers Julian Edelman and Rob Gronkowski periodically.

Brady has cemented himself in both the MVP and Super Bowl conversation for the better part of the past decade. The 2015-16 NFL season is no different.

The Arizona Cardinals have been the quiet-but-mighty team in the NFL this season. Their quarterback, Carson Palmer, has been no different.

Coming off of a season-ending knee injury in 2014, Palmer has led his team to a 12-3 record, an NFC West title and the Cardinals have clinched a first-round bye in the NFC playoffs. Palmer’s 34 touchdowns thrown ranks third in the NFL, behind both Brady and Jacksonville’s Blake Bortles (35). Palmer ranks in the top four in every statistics as a quarterback, including yards (4,542) and rating (106.8).

Not only would Palmer be an unsurprising choice for NFL MVP, but he also qualifies for the NFL’s Comeback Player of the Year award, and who knows…maybe even Super Bowl 50 MVP.

Don’t miss your opportunity to see Super Bowl 50 in person, complete travel packages are still available! And while you’re there, might as well enjoy yourself, right? This year’s 2016 Players Super Bowl Tailgate tickets are still available! The best pregame tailgate in the world, hosted by Fox Sports’ Erin Andrews, with food created by chefs Guy Fieri, Aaron May and Beau MacMillan!