Road to Super Bowl 50: Divisional Round

Road to Super Bowl 50: Divisional Round

Another weekend closer to Super Bowl 50 means another weekend packed full of NFL football. And of course, an NFL playoffs weekend wouldn’t be complete without some controversy, some overtime thrillers and a set up of two of the greatest quarterbacks to ever play the game. 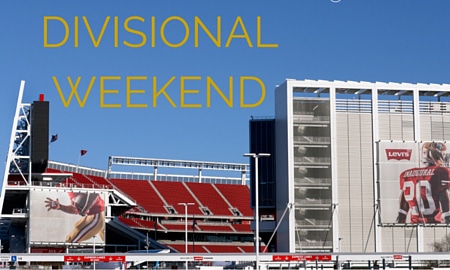 The New England Patriots handled business as usual on Saturday, handing the Kansas City Chiefs their first loss in twelve weeks. The Patriots, who have always been a force to be reckoned with at home, were in the conversation for a completely different reason, however.

Arguably one of the less exciting games of the weekend, the Broncos walked away victorious thanks to the only turnover of the game.

An injury-riddled Pittsburgh Steelers roster forced head coach Mike Tomlin to start running back Fitzgerald Touissant, who fumbled the football late in the fourth quarter, giving the Broncos the ball ahead of what would become the game winning touchdown drive.

You might have heard the names of the two starting quarterbacks in this game a time or two. On the AFC side, we will be treated to Peyton Manning and Tom Brady’s fifth postseason meeting, and 17th meeting overall, in what might be the two’s final meeting of their respective careers.

The story lines that came from Arizona’s 26-20 overtime victory are numerous: the last-second hail-mary from Packers quarterback Aaron Rodgers to tie the game, the botched coin flip at the beginning of overtime, Larry Fitzgerald’s 75-yard catch and run to set up the win.

Without a doubt, this week 16 matchup proved to be the most exciting and controversial of the four.

Carolina dominated the Seattle Seahawks early, heading into halftime with a 31-0 lead. Most had already penciled in the Panthers into next week’s NFC Championship game. But that’s why you use pencils, because it’s not over until the clock strikes zero.

Seattle scored 24-unanswered points to bring the game within a touchdown, all before failing to recover the onside kick, securing Carolina’s win. Carolina’s second half woes will have to be addressed if the Panthers want any hope of defeating the Arizona Cardinals on Sunday.

The AFC Championship isn’t the only game that features a phenomenal matchup at the quarterback position. Cam Newton of the Carolina Panthers and Carson Palmer of the Arizona Cardinals will be the first playoff matchup between two Heisman trophy-winning quarterbacks in NFL history.

The two best teams all season in the NFC have remained hot in the playoffs, and now there can only be one.

Are you a die-hard fan of the Panthers, Cardinals, Patriots or Broncos? How about just a die-hard football fan looking for the experience of a lifetime? Super Bowl 50 ticket packages are still available, complete with game tickets and a ticket to the 2016 Players Super Bowl Tailgate! Emceed by Fox Sports’ Erin Andrews, food from a team of celebrity chefs lead by Guy Fieri, and 25+ current, active NFL players to sign autographs and chat with. Don’t miss your chance of a lifetime!