The stage has officially been set. The National Football League’s 50th edition of Super Bowl Sunday will feature both a familiar face, and an up-and-coming superstar. Here’s a look back on how we got to the Carolina Panthers facing off against Denver Broncos in Super Bowl 50. 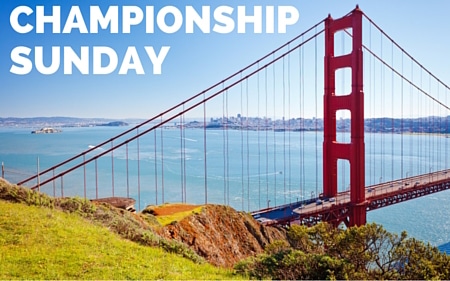 Despite the final score, the chasm of offensive efficiency between the Denver Broncos and the New England Patriots was much larger than two points.

Without a doubt, the Patriots were missing the presence of a feature running back, but the narrative that will hold will be Peyton Manning gets the best of Brady, giving Manning the playoff record advantage at 3-2.

The NFC Championship game was nowhere near as exciting as it’s counterpart, ending with Cam Newton and the Carolina Panthers dabbing their way into Super Bowl 50.

Panthers nation, Broncos fans, we’ve got your Super Bowl travel packages! Complete with airfare, hotel accomodations and a ticket to the hottest VIP Tailgate in San Francisco, the 2016 Players Super Bowl Tailgate! Emceed by Erin Andrews, mingle with over 25 current NFL players, dine on a feast prepared by Guy Fieri and a team of celebrity chefs! It’s all included! Get your tickets today!