We’ve officially kicked off the road to to Super Bowl LI in Houston! A look back at Week 1 and what it means for the path to the big game. 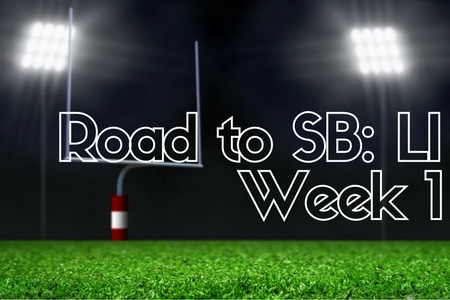 Week 1 in the NFL was filled with excitement, as many games came down to the final minutes or overtime.

In the season opener on Thursday night, the Carolina Panthers missed a field goal at the end of the fourth quarter that would’ve won them the game. The Denver Broncos and starting quarterback Trevor Siemian eked out a win, 21-20.

After falling behind to the San Diego Chargers 21-3 at halftime, quarterback Alex Smith and the Kansas City Chiefs rallied to tie the game at 27 by the end of the fourth quarter. The Chiefs would go on to score an overtime touchdown, giving them the week one divisional victory, 33-7.

In what was perhaps the most exciting game on Sunday, the Indianapolis Colts also overcame a 21-3 deficit to take the lead over the Detroit Lions, 35-34, with 37 seconds left in the game. The Lions, however, were able to drive down the field and put kicker Matt Prater in position to hit the game-winning field goal with four seconds left, giving the Lions a 37-35 lead. The Colts would attempt the last second kickoff lateral play, resulting in a safety, giving the Lions a 39-34 victory.

Super Bowl favorites in the AFC maintained victories on Sunday and Monday night, as the New England Patriots (sans Tom Brady) were able to narrowly defeat the Arizona Cardinals, who also missed a field goal in the closing seconds of the fourth quarter. The Pittsburgh Steelers handled the Washington Redskins on Monday Night Football, securing a 38-14 victory with much help from all-pro receiver Antonio Brown.

Football is back! Secure your Super Bowl LI travel plans today, with one of our luxury Super Bowl travel packages! Experience world-class hotels, the ultimate hospitality packages, and a ticket into our Players Tailgate at Super Bowl LI!