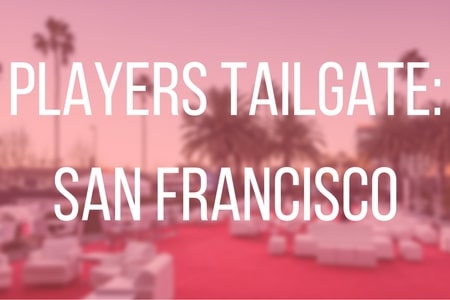 The lineup of players at the 2016 Players Tailgate at Super Bowl 50 was the biggest yet! Ranging from Pro Bowl players such as cornerback Vontae Davis from the Indianapolis Colts and running back Jamaal Charles from the Kansas City Chiefs, to Super Bowl winners, such as Shane Vereen (formerly of the New England Patriots).

The food at the 2016 Players Tailgate could be called nothing less than a VIP culinary experience. All-you-can-eat spreads, whipped up by our five-star team of chefs, led by Guy Fieri, Aaron May, G Garvin and Beau MacMillan, led for some delicious eats.

A whole-hog roast, a gourmet mac-and-cheese bar with FIVE different types of macaroni and cheese, premium raw bar with lobster, crab, and various other seafood types.

Interested in the 2017 Players Tailgate at Super Bowl 51 in Houston? Stay tuned, because emcee and chef announcements will be coming soon! In the meantime, reserve your ticket TODAY!