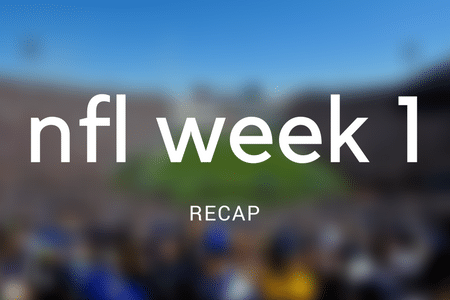 The NFL season is finally here! After a great weekend full of action-packed NFL games, we’re taking a look back at the week that was in the league.

Due to Hurricane Irma’s impending landfall and subsequent impact on the state of Florida, the NFL’s decided to postpone Week 1’s matchup between the Tampa Bay Buccaneers and Miami Dolphins, instead opting to play the game in Week 11, during both teams’ bye week. Despite not kicking off their season until Week 2, this will leave both teams playing 16-straight weeks without a bye.

At home, on a Super Bowl banner night, with arguably the best quarterback to ever play the game, the New England Patriots seemed to be a heavy favorite opening up the 2017 season against the Kansas City Chiefs at home. However, the Chiefs had other plans. Quarterback Alex Smith erupted for 368 yards and four touchdowns, and the Chiefs held Tom Brady himself scoreless, as Kansas City walked out of Foxboro with a 42-27 victory.

Leading the charge was Chiefs rookie and former Toledo running back Kareem Hunt, who manage 148 yards and one touchdown on the ground, while also catching five passes for 98 yards and two touchdowns. Overall, Hunt left Thursday’s game with 246 all purpose yards and three touchdowns.

America’s Game of the Week

This week’s highlighted matchup came in the late games on Sunday, with the Seattle Seahawks traveling to Green Bay to take on the Packers. A low-scoring, defensive affair, the Packers rode quarterback Aaron Rodgers’ 311 passing yards and one touchdown to victory, while relying on their defense to keep the at-times explosive Seattle offense at bay, and holding the ball for nearly 40 minutes of the game. Seahawks QB Russell Wilson was liited to just 158 yards total, with no scores.

Scores from Around The League: Week 1 (via Fox Sports)