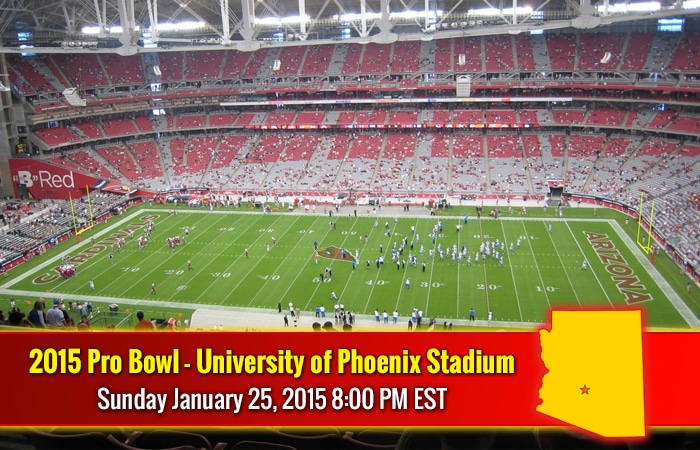 For the first time ever, the NFL Pro Bowl and Super Bowl will be held in the same city just one week apart. This is an interesting idea, local West Coast fans can easily see both events, but the cool part is the Pro Bowl will be the start of the Super Bowl festivities. Fans from out of town could potentially take in the entire week’s worth of events if they arrive Sunday and depart the Monday following Super Sunday.

The Pro Bowl is the most watched All-Star game in sports and most experts are projecting this year to be the highest rated of all time, mostly due to its proximity to the Big Game in Arizona. It will be interesting to see how it turns out, the host city will be warm, easily accessible to West Coast fans and may launch SB week into the stratosphere.

Keep in mind that the 2016 Pro Bowl will return to Hawaii and take place on Sunday January 31, 2016 at Aloha Stadium in Honolulu, HI. Super Bowl 50 will be played at the new 49ers Levi Stadium just outside San Francisco. Ca.

This past year the game was presented to fans as a Fantasy Team, two coaches in Dion Sanders and Jerry Rice selected players from both NFC or AFC to build their teams. This concept went well, the game was competitive with Jerry’s team winning 22 – 21 and Nick Foles of the Philadelphia Eagles winning the Offensive MVP and Kansas City linebacker Derrick Johnson receiving the Defensive MVP Award.

Mark your calendars and be ready for the start Super Bowl week with the commencement of this year’s Pro Bowl.