With just three weeks left in the NFL season, we’re getting closer and closer to Super Bowl 52 in Minneapolis in 2018. A look back at the New York Giants and Baltimore Ravens squaring off in Super Bowl XXXV. 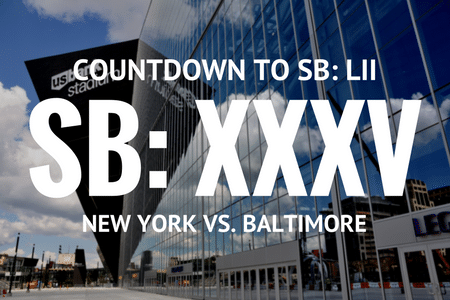 In front of over 72,000 fans at Tampa Bay’s Raymond James Stadium, the Baltimore Ravens would capture their first Super Bowl victory largely due in part to their dominating defense, defeating the New York Giants 34-7.

Super Bowl XXXV was broadcasted to more than 84 million viewers world wide on CBS, with broadcasting duties handled by Phil Simms and Greg Gumbel. The National Anthem for the Super Bowl was sung by the Backstreet Boys, and halftime was provided by popular rock band Aerosmith. The cost of a 30-second commercial in 2001 took a massive hike, jumping to more than $2.1 million for Super Bowl XXXV.