Super Bowl XIX returned to the state of California in 1985, with a home-favorite San Francisco 49ers taking on the AFC champion Miami Dolphins at Stanford Stadium in Stanford, California. The Countdown to Super Bowl LII in Minneapolis rolls on. 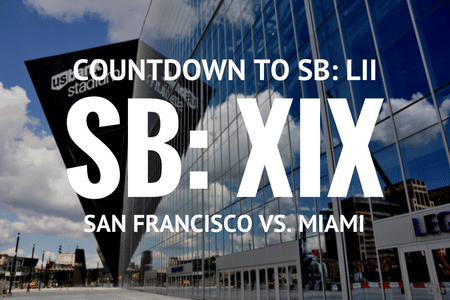 Super Bowl XIX was also a first in many other areas. The game was broadcast for the first time on ABC, and President Ronald Reagan became the first sitting president to participate in the pre-game coin toss ceremony, taking part in a televised even directly from the White House. The cost for a commercial during Super Bowl XIX sharply increased to a whopping $525,000 for 30 seconds of air time, with more than 85.53 million viewers watching the big game.