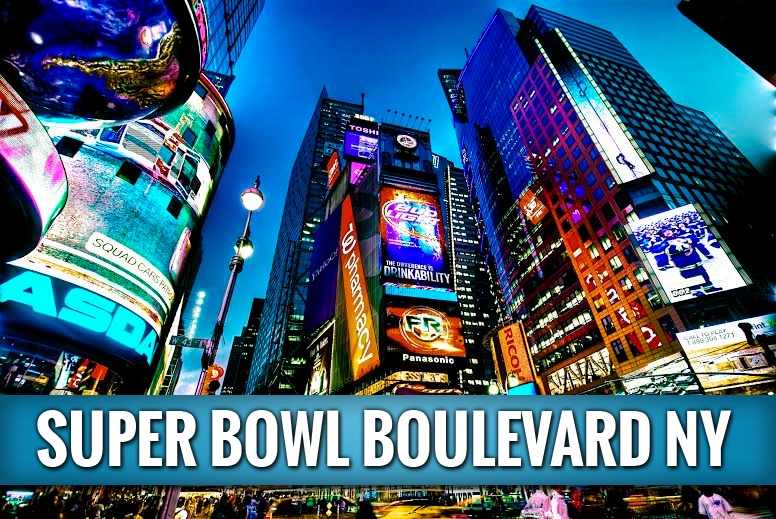 When: Wednesday January 29 through Saturday February 1, 2014

Where: On Broadway between 34th and 44th Streets, New York City, Times Square

This special activity is similar to the NFL Experience from other host cities, but, in the big apple the NFL is calling it Super Bowl Boulevard. During the week you look at the schedule for autograph signings, take pictures the Lombardi Trophy, stand in front of the XLVIII New York sign, ride the stomach dropping toboggan run and much more. This entire experience is created and engineered by GMC the official sponsor.

NFL’s World championship trophy goes to the winner of the AFC or NFC champion who wins the game, it’s rare, but you will be able to see it, touch it and snap a iPhone picture with it. Be sure to post it on instagram, twitter and facebook and tag the Super Bowl Boulevard.

The roman numerals represent this particular years Super Bowl in history, grab a picture in front of the massive “XLVIII” Roman numerals and validate your memory of this game. Be sure to post it on instagram, twitter and facebook and tag the Super Bowl BLVD.

Not exactly the same but similar to the Jamaican Bobsled team in the Olympics, take a sled ride down the shoots of the Toboggan Run or just watch as fans wipe out and shake their heads and get in liune again. Grab a cup of hot coffee or hot chocolate and walk this incredible 10 blocks of NFL Fan fun.

Location: On Broadway between 39th & 40th Streets
Check the schedule and grab free autographs from your favorite past or present NFL player, live autographs daily from 12 noon – 6:00pm. When not occupied by NFL players, watch live concerts between 8pm – 10pm nightly.

Location: Broadway between 34th and 35th Streets
Similar to the Sony-tron in Times Square, Macy’s will display NFL historic game clips in 10-minute increments projected on the façade of Macy’s Department Store at Herald Square.

Taste of the NFL Charity Event

Featured Chefs from all official NFL cities, along with a celebrity
representative from each team, will serve regional dishes from that specific city. Other top New York City Restaurants like Tribeca Grill and Nobu New York will prepare their fan favorite dishes. This is an annual charity event to benefit the Food banks in each NFL city. This is such a fun event, you are guaranteed to come in contact with NFL players of past years or present. The details for this event can also be found here www.tasteofthenfl.com.

Tickets and packages for this years Super Bowl XLVII are available by calling 1-866-881-5375 or visit us online at www.superbowltickets.net. New York / New Jersey is the first cold weather city to host a Super Bowl game of this magnitude, many experts are predicting a major rush for tickets due to the surrounding population in North East USA. So many great indoor and outdoor events have been planned, only thing left to do is deceide the teams and play the game, we will see in NYC first Sunday in February.