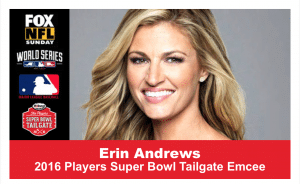 We’re proud to announce Erin Andrews as the official emcee of the 2016 Players Super Bowl Tailgate!

Erin Andrews has solidified herself as a leader of the sports broadcasting and a national recognized television personality. As a member of FOX Sports “A-Team”, Erin Andrews currently reports as a features host and sideline correspondent for FOX NFL Sunday. Erin also lends her talents and unique perspective reporting to the MLB All Star Game and presented the World Series trophy to the Kansas City Royals.

The exclusive Players Super Bowl Tailgate has earned a reputation as the premier Super Bowl pre-game experience, where over 25 active NFL players, celebrities and guests eat, drink and get entertained before the Super Bowl Championship game. Described as a culinary experience in itself, the event boasts having the most recognizable chef in America, Guy Fieri, to create the menu and prepare the food. If having Guy Fieri as the headliner chef wasn’t enough, Beau MacMillan and Aaron May have signed up to fill out its lineup of celebrity chefs at the event!

The Players Super Bowl Tailgate features an open premium bar and all-you-can-eat food. Guests can and will enjoy a hospitality lounge lined with tables, couches and other areas where they can watch ESPN’s pre-game coverage broadcast on large television monitors.

“We host 25+ active NFL players in attendance that are the who’s who of NFL. Super Bowl Champions, Pro Bowlers and the games hottest rookies. This is not an event where you go and see some retired NFL player from the yesteryears. The name The Players Super Bowl Tailgate says it all; this event is where you go to get up close and personal with the players you see on Sundays on television,” said Kyle Kinnett, spokesperson for Bullseye Event Group. 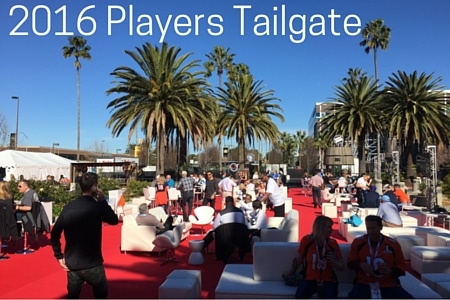 The 2016 Players Tailgate took place on February 7, 2016, in the parking lot of the Hyatt Regency in Santa Read more