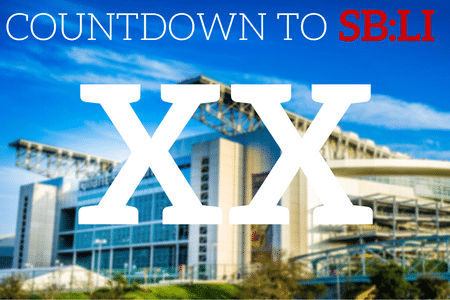 The Countdown to Super Bowl LI in Houston rolls on, with two new teams making their first appearance in Super Bowl XX.

The Chicago Bears and the New England Patriots played Super Bowl XX on January 26, 1986 with a total of 73, 818 people in attendance. The final score was 46-10, with the Bears taking home the victory.

This was the first time both of these teams had participated in any Super Bowl. In fact, the Bears came into the Super Bowl after an impressive season of winning 15 games that year. The MVP of Super Bowl XX was Richard Dent, Bears defensive end, who ended up recovering 2 fumbles, a blocked pass, and one and a half sacks.

Super Bowl XX had a total of 92.57 million viewers! Believe it or not, but every single MVP of past Super Bowl games were honored at Super Bowl XX. The cost of a 30 second commercial was around $550,000, which was a tremendous increase from previous Super Bowls. Up With People was the entertainment for Super Bowl XX and the theme was “Beat of the Future.”

If we’re talking about the crème le crème of Super Bowls, then Super Bowl XX would win the title up Read more