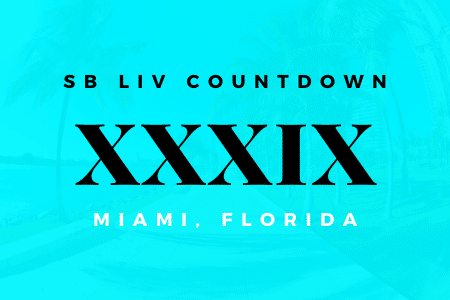 Just a matter of weeks away from kicking off Super Bowl 54 Sunday in Miami, we’ve got the New England Patriots in their third Super Bowl appearance in four years, facing the Philadelphia Eagles in Super Bowl XXXIX.

Yet another exciting, close Super Bowl matchup, the dynamic Brady-Belichick duo of the New England Patriots would go on to win their third Super Bowl in four years, a 24-21 victory over the Philadelphia Eagles. Super Bowl XXXIX was played at Alltel Stadium in Jacksonville, Florida, in front of over 78,000 fans.

Patriots wide receive Deion Branch would go on to win Super Bowl MVP honors, recording a total of 133 receiving yards on 11 catches, including a crucial catch to set up kicker Adam Vinatieri for a 22-yard field goal that would put the Patriots ahead 24-14 late in the fourth quarter. Branch’s 11 catches in Super Bowl XXXIX would give the receiver the record for most combined receptions in two Super Bowls.

Playing it safe after the previous year’s halftime wardrobe malfunction, the legend Paul McCartney was brought in to perform Super Bowl XXXIX halftime, with the pre-game National Anthem being performed by a mixture of choirs from the armed forces. Over 86 million viewers tuned in to catch the Super Bowl on FOX, and the cost of a 30-second commercial was up to $2.4 million total.