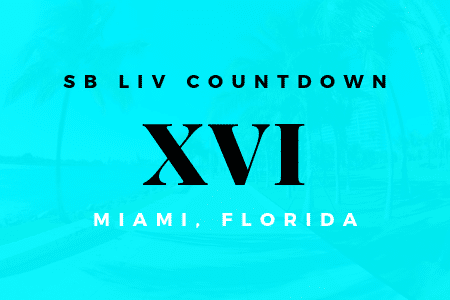 As we get set to embark on Week 2 on the Road to Super Bowl 54 in Miami, we’re headed to Pontiac, Michigan for Super Bowl XVI between the San Francisco 49ers and Cincinnati Bengals.

The San Francisco 49ers would capture the Lombardi Trophy in Super Bowl XVI, defeating the AFC champion Cincinnati Bengals by a score of 26-21. Over 81,000 were in attendance for the 16th installment of the Super Bowl, this time being played at the Pontiac Silverdome, in Pontiac, Michigan.

Trailing 26-14, the Bengals would score a touchdown in the waning seconds of Super Bowl XVI to make it 26-21, but would fail to recover an onside kick, leading San Francisco to the victory. San Francisco 49ers quarterback Joe Montana would take home Super Bowl MVP honors, completing 14 of his 22 passes for 157 yards and a touchdown, while also recording a touchdown on the ground.

The cost of a 30-second TV commercial rose once again in 1982, up to $324,000, the most expensive to date. Pat Summerall and John Madden handled broadcasting duties for Super Bowl XVI, which brought in a record 85.24 million viewers worldwide.

It seemed as though the group “Up with People” was starting to make a themselves regulars at the Super Bowl. The halftime show for Super Bowl XVI was Up with People presents “Salute to the 1960s and Motown.” Pat Haggerty was the referee for this Super Bowl and the future hall of famers recorded were Bill Walsh (coach), Fred Dean, Ronnie Lott, Joe Montana.