As we continue to count the days until kickoff on the Road to Super Bowl LII in Minneapolis, we also continue to look back. Up next, Super Bowl VII between the perfect Miami Dolphins and Washington Redskins. 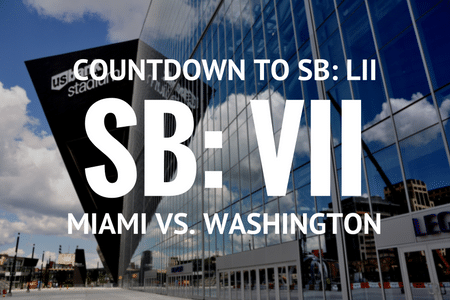 Super Bowl VII was played between the Miami Dolphins and Washington Redskins in January of 1973, a game which saw the Dolphins capture the Lombardi Trophy in a 14-7 victory. Played in front of over 90,000 fans, the Super Bowl returned to the Memorial Coliseum in Los Angeles, California, once again.

The Miami Dolphins were able to capture the NFL’s first (and to this day, only) perfect season, winning every game in the regular season, playoffs and ultimately, a Super Bowl.

When the Super Bowl began airing on television, commercial air time was quite expensive, though it’s nothing compared to what it costs today. A 30-second spot on TV in 1973 was around $88,000. However, that’s chump change compared to what brands are paying in today’s day and age, well into the millions. The halftime show for Super Bowl VII consisted of another marching band act, this time Woody Herman and the University of Michigan marching band.