As the free agency frenzy winds down in the NFL, teams are elbow deep in preparations for the 2019 NFL Draft. What do the experts think will happen in the first round of the always-surprising and hard-to-predict rookie selections in just a few short weeks? 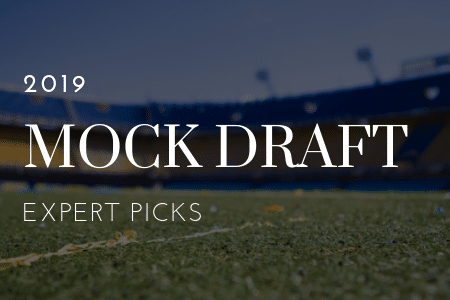 “Then-Texas Tech head coach Kliff Kingsbury recruited Murray to be his quarterback out of high school, as he’s the perfect fit for what Kingsbury wants to do offensively. If the Arizona Cardinals are brave enough to hire a head coach whose college alma mater fired him for failing to win games, they have to give him the right pieces to run his offense.”

“The 49ers would love to get an elite edge player to add to their defense. Bosa would be that.”

“The Jets are in the prime position to trade back with a QB-needy team. But if New York stays at No. 3, the J-E-T-S will gladly take the next-best pass rusher available.”

“The Raiders‘ only chance to get a premiere edge rusher is here, not in the 20s.”

“They are said to love this kid, but it’s really high for an off-the-ball linebacker. Even so, he’s a heck of a player.”

“The New York Giants need a quarterback of the future, and by all accounts, they want someone to learn behind Eli Manning for a short time much like Patrick Mahomes did with Alex Smith. Drafting a smart, talented quarterback who could benefit from some acclimation time in the NFL after only starting one year at Ohio State would help the Giants transition into their post-Manning era.”

“The Jaguars need to upgrade their offense this offseason. Jacksonville elects to add a receiver with unlimited upside.”

“With the class’s hottest name on the board available to fill the Lions’ biggest need, general manager Bob Quinn and head coach Matt Patricia would likely jump at the chance to make him a building block on the outside of the defense.”

“If I were the Bills, I’d move Dion Dawkinsto right tackle and slide Dillard — the best pass blocker in the draft — in at left tackle.”

“The Broncos have Joe Flacco, but he’s not the long-term answer. Lock would be.”

“The Cincinnati Bengals desperately need to add speed on defense, whether at edge-rusher, linebacker, defensive tackle or in the secondary. That means the front office can select the best defensive player available, which would be Oliver.”

“The Packers filled a ton of needs in free agency. They fill a big hole on offense with the best tight end in the draft.”

“Since Miami’s biggest need is at edge-rusher, betting on one of the most productive and impactful defenders in college football over the last two seasons is a win at No. 13.”

“They have a problem next to Grady Jarrett, so why not take a player from the same school to fill it?”

“The Redskins have to do something at QB. If Washington doesn’t acquire Rosen, the Redskins might be forced to take a QB higher than expected.”

“It’s imperative for the Carolina Panthers to bolster their offensive line this offseason. If Cam Newtonis healthy enough to play in 2019, the front office must protect him better up front.”

“While he often played as a slot receiver in college, that was more a product of the system at Ole Miss. He also has the ability to win on the outside of the formation. Brown has excellent route-running skills, impressive speed (4.49 seconds) and great physicality at 226 pounds on his 6’0″ frame.”

“The 49ers would love to get an elite edge player to add to their defense. Bosa would be that.”

“The Titans need to find out if Marcus Mariota is the long-term answer in Tennessee. Picking up a weapon for the middle of the field should help.”

“Murphy is an excellent technician at the position, helping to bolster the Steelers‘ secondary.”

“The Seahawksadd a pass rusher opposite Frank Clark, who’s currently set to play the 2019 season on the franchise tag.”

“Alabama’s Josh Jacobs is a power back with moves and soft hands. He’s a flawless receiver out of the backfield, and he has the patience, vision and agility to be a featured back in the Ravens’ scheme.”

“The Texans’ biggest priority of the offseason is to make sure quarterback Deshaun Watson is better protected in 2019.”

“Antonio Brown, Tyrell Williamsand Irv Smithwith Derek Carr! The Raidershave made a lot of moves this offseason to become a better football team.”

“Offensive line depth could be a need, but the Eagles are signing many of their free agents there to keep the group together. With Brandon Graham back at defensive end and the offensive line intact, receiver becomes the biggest need. Brown is the best player left on the board to fill it.”

“The Colts need a dominant player inside and Simmons has the tools to do that. Only a torn ACL in January is keeping him out of the top 10. ”

“Johnathan Abram is like Atlanta Falcons safety Keanu Neal all over again. He’s powerful, fast, smart and has the right tools to dominate the middle in coverage and take away the run.”

“The Chargers are extremely talented, but the Bolts could use some help in the middle of their defense.”

“Baker might not have elite speed, which is why he’s on the board at No. 29, but he is good enough to win against the best in the SEC. He could be a No. 1 cornerback for the Chiefs.”

“Safety was a major problem for the Packerslast year, but Rapp and free-agent pickup Adrian Amosare the solution.”

“Coming off a Super Bowl loss, the Rams must improve their aging offensive line.”

“Trayvon Mullen didn’t see a ton of targets in college since ACC quarterbacks avoided him, but when he was challenged, he made plays like the interception and sack that helped clinch a national title for the Tigers against Alabama. Mullen’s size (6’1″, 199 pounds) and speed (4.46-second 40) are intriguing enough without his playmaking skills.”