As we continue on the Road to the 2019 Super Bowl in Atlanta, the Denver Broncos and Atlanta Falcons were the two teams who showed up to face off for Super Bowl XXXIII in Miami, Florida. 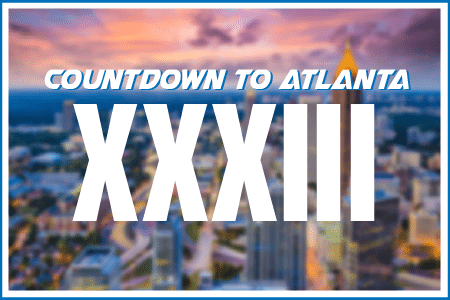 There was a turnout of 74,803 fans for Super Bowl XXXIII in January of 2000, witnessing the Broncos walk away as Super Bowl champions by a score of 34-19.

The MVP of Super Bowl XXXIII was John Elway, quarterback for the Denver Broncos. John Elway had an 80-yard touchdown pass to Rod Smith. This was a special game for the Broncos because they were just at the Super Bowl the previous year and played their hearts out. Elway was noted the oldest player to ever be named MVP.

Gloria Estefan was the halftime entertainment for Super Bowl XXXIII. People were starting to really love the Super Bowl and there were a total of 83.7 million viewers for this game! The cost of a 30 second commercial went up to $1.6 million. Fox network aired the Super Bowl for XXXIII and Pat Summerall and John Madden were the announcers!