With the NFL’s free agency and NFL Draft periods officially coming and going, teams are beginning to report to organized team activities (OTA’s) as they set their sights on Super Bowl LII in Minneapolis. Who are the top rookies with the most to prove this upcoming NFL season? 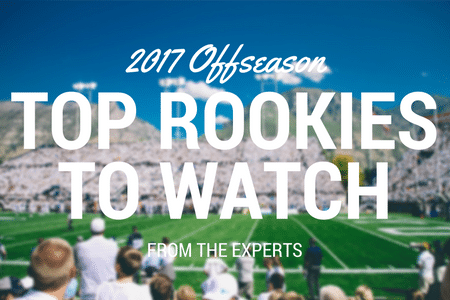 “A bruising, between-the-tackles runner who has drawn comparisons to Adrian Peterson, Fournette will be the first rookie picked in countless seasonal and dynasty (fantasy) leagues. He should be considered the main man in the Jaguars backfield, even with Chris Ivory and T.J. Yeldon in the mix, and a lock top-50 overall selection. Fournette won’t make an Ezekiel Elliott impact in 2017, but he’ll be a solid No. 2 running back.” – Michael Fabiano, NFL.com

“Enter 6-foot-3 Corey Davis out of Western Michigan (#MACtion). He’s drawn comparisons to Demaryius Thomas because of his frame, but dropped passes in college allowed critics to drop their two cents on the table. Davis’ fantasy value becomes a question of distribution of touches between DeMarco Murray / Derrick Henry / Rishard Matthews and 32-year-old Delanie Walker, who has carried the passing game on his shoulders for years.” – Ryan Fowler, FOX Sports

“Even with only one year as a college starter, Hooker showed NFL scouts why he’s as much of a takeaway artist as the 2017 NFL Draft offered. Colts GM Chris Ballard saw that and more in the former Ohio State star, but his ability to create turnovers was paramount in the selection. As long as he’s healthy (Hooker underwent offseason surgeries for a sports hernia and a hip injury), he should quickly become a ballhawking presence in the Colts‘ secondary.” – Chase Goodbread, NFL.com

“McCaffrey isn’t considered a good fit for the Panthers offense in the minds of some analysts, but has this unit ever had a runner with his skill set? You don’t draft someone eighth overall and not use him to the best of his abilities, and he fills a need in an offense that lacks playmakers. McCaffrey can do it all on the gridiron, and I think he’ll be a better fantasy option than veteran Jonathan Stewart as a rookie.” – Michael Fabiano, NFL.com

What rookies are you most looking forward to watching when the 2017 NFL season kicks off in September?