In the latest edition of our 2017 NFL expert mock draft roundup, we take a look at picks #11 through #15 in April’s 2017 NFL Draft from Philadelphia. 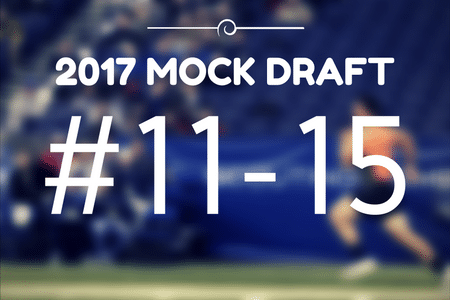 “Here’s all you need to know: 30th, 32nd, 31st — that’s where the Saints’ defense has finished the last three years. So it stands to reason that they continue to add defensive playmakers early in the draft, which is why defensive end Taco Charlton — who has drawn comparisons to Chandler Jones — is the pick here.” – Ryan Wilson, CBS Sports

“Securing a starting quarterback and a generational talent like Garrett would be a home run of a draft for the Browns’ front office. Don’t mess this up, Sashi Brown. Among the top QB prospects, it feels like Kizer is the guy talked about least. He has traits to be a strong pocket passer and is the biggest of the first-round candidates.” – Emily Kaplan, MMQB

“The Cardinals need help in the secondary and Jones is a rangy cornerback who plays like a receiver when the ball is in the air. He’s been compared to Marcus Peters, the Chiefs’ 2015 first-round pick.” – Ryan Wilson, CBS Sports

“Williams is a specialist in traffic and excels at making the tough grade with defenders all around him. He’s not the fastest player in the class by any means, but he is the best overall wide receiver on my board. His route-running, size and length all add up to making him a true No. 1 wideout prospect.” – Matt Miller, Bleacher Report

“One of the reasons Chris Ballard was attracted to the Indy GM job was Andrew Luck. So Ballard must do everything he can to ensure that Luck is in the best position to succeed—and for Indianapolis, that means addressing an Achilles heel: the offensive line. Pair Robinson with his former Crimson Tide teammate Ryan Kelly, and the Colts are getting back on track.” – Emily Kaplan, MMQB