The AFC East is predominantly the New England Patriots’ division, and has been for over a decade. Here is what 2016 will look like for the AFC East. 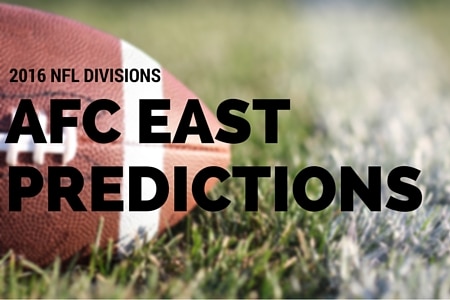 The New England Patriots will face a tougher road in the 2016 season, with quarterback Tom Brady’s “Deflate Gate” suspension remaining in place (for now). However, it’s Bill Belichick. So it’s hard to believe the Patriots will fall much further than their 12-4 mark in 2015.

The New York Jets remain in an unstable limbo at the quarterback position, losing journeyman Ryan Fitzpatrcik, leaving the Jets with third-year veteran Geno Smith, who missed half of last season with a broken jaw, and unproven rookie Christian Hackenberg out of Penn State.

The Bills have improved mightily over the offseason, adding bulk to their defense through both free agency in the draft. The Bills remain in limbo at the QB position as well, returning starter Tyrod Taylor from 2015, but also having draft pick Cardale Jones.

The Dolphins, once again, played the role of big spender in free agency. However, whether or not this will payoff remains to be seen. After dropping loads of money on defensive tackle Ndamukong Suh in 2015, the Dolphins went after veterans such as Mario Williams in 2016. The Dolphins did, however, lose a large chunk of their offense in running back Lamar Miller, who signed with the Houston Texans.

Prediction? The Patriots take the AFC East once again, be challenged closely by the Bills. The Jets and Dolphins will, most likely, be sitting at the bottom of the AFC.