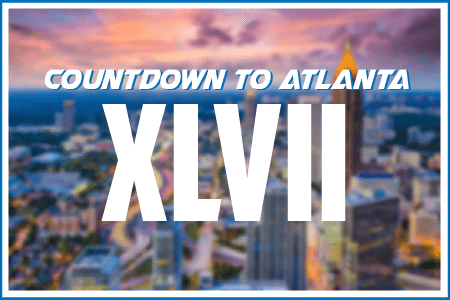 Divisional weekend is almost here! And with that, the Road to Super Bowl 53 continues to narrow. Up next on our Countdown to Super Bowl 2019 in Atlanta, we’re headed to New Orleans for Super Bowl XLVII.

On February 3, 2013 in New Orleans, Louisiana the Baltimore Ravens and San Francisco 49ers played in Super Bowl XLVII. This was a unique game because for the first time, two brothers were going head to head against each other as coaches. The final score of the game was 34-31 and it was played in the Mercedes Benz Super Dome.

The MVP of Super Bowl XLVII was Joe Flacco. Flacco ended up completing 22 of 33 passes for 287 yards and three touchdowns. He was also the fourth quarterback “in a row” to receive the MVP title during the Super Bowl. The head referee of the game was Jerome Boger and there were 71,024 people in attendance for this Super Bowl.

The National Anthem was sung by Alicia Keys and the halftime entertainment was Beyonce. The announcers of the game were Jim Nantz and Phil Simms. The cost of a 30 second commercial during Super Bowl XLVII was $4 million dollars. CBS broadcasted the game and the total cost of a commercial for this network rang in as being the most expensive ever recorded in Super Bowl history.